One Little Idea That Made a BIG (100 Pound) Difference! 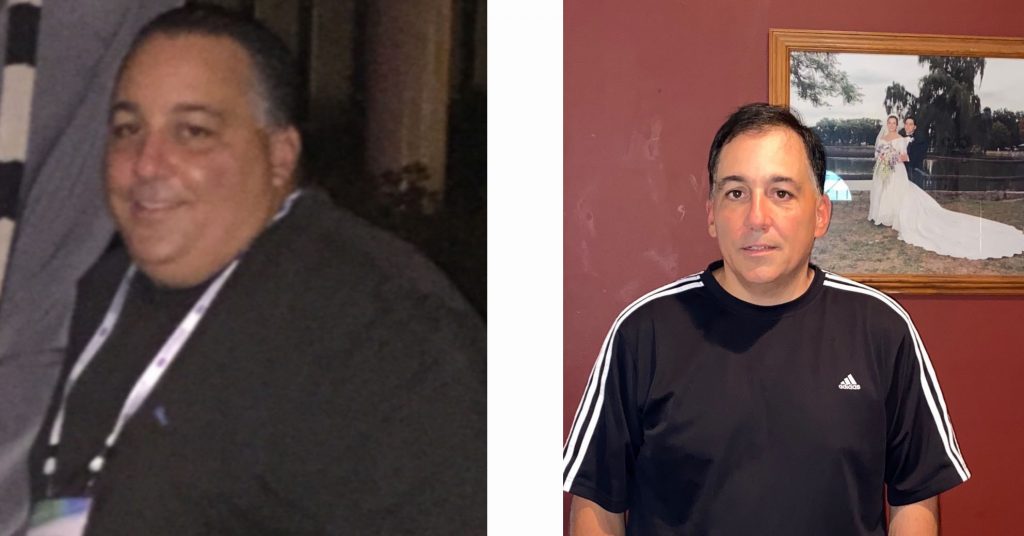 In April 2019, I opened an email that changed my life.

It was a note encouraging our pharma team to dive into a new online learning module called “Be Curious” by Jill Donahue. And I was curious!

In the lesson, Jill talked about the compound effect. She was trying to inspire us to continually improve by dedicating just a few minutes each day to learning. For me, it did so much more.

It was a simple idea. If you make small, seemingly inconsequential positive changes and stick with them, they add up to big impacts. Those tiny actions compound, and as time goes by, you begin to see a significant difference.

To illustrate the idea, Jill told the story of three friends.

The first friend decides to make several small, positive changes in his life. To improve professionally, he starts reading ten pages a day and listening to self-improvement podcasts. To improve his health, he walks a couple thousand extra steps per day, and he substitutes a single can of soda each day for water.

The actions are not radical—he simply makes a handful of deliberate decisions.

Meanwhile, the second friend makes a few small but negative changes. He invests in a big screen tv and a new bar in his family room, so he finds himself watching more movies and drinking more frequently. At the same time, he lets up on his diet and indulges in eating dessert a little more often.

Still, they are only small differences.

The third friend makes no changes. He continues along the way he always has.

After she described each guy, Jill showed us the results of their decisions over time—and that is where the lesson really grabbed my attention. She explained that after only a few months, there is virtually no difference between their lives. But if you fast forward two and half years, we begin to see measurable, perceivable differences.

The first friend is now trim, and after investing 1,000 hours reading good books and working on self-improvement, he earns a promotion at work. Because he feels more confident and has more energy, his marriage is thriving.

The second friend is now overweight. He is sluggish from the weight gain, and because he feels worse about himself, he starts retreating from his wife. His marriage deteriorates as a result.

And the third friend? He is exactly where he was two years ago but now, he is bitter about it.

I watched the video all the way through. Then I watched again and again. It must have been 10 times I watched it through. I wanted to be that first guy.

Even now, when I think about the lesson, I vividly remember the slide where Jill calculated the compound effect of removing that single soda. Her calculations showed that after two and a half years of cutting out 125 calories per day, you avoid a total of 117,500 added calories—that translates to about 33 pounds in weight loss. When I saw that number, a lightbulb went off in my brain. I realized that I didn’t have to overhaul everything in my life to start improving it. I just had to make some simple changes.

I’ve struggled with my weight for years. I tried countless diets, but each time my weight dropped, it would swing back up again like a yo-yo, leaving me more frustrated and discouraged than before. Nothing stuck. My cholesterol was growing dangerously high, and I was becoming more worried about my health. In the back of my mind, I couldn’t help but think about my dad, who died at just 52.

The Compound Effect felt like a new start—it was more manageable than those diets and I could see myself committing to it long term. Instead of making big, sweeping changes that I could not sustain, the strategy encouraged small, smart choices that add up to big rewards.

After the lesson, I decided to make the change I saw in the video—replacing a can of soda with diet soda. It was easy enough to do. And when I discovered that one adjustment wasn’t difficult, I made another, then another.

Each week, I added one more positive alteration to improve my health, each one more significant than the last. I switched from soda to diet soda. Then, I cut out fast food. Then alcohol (at least on weekdays!).

I started walking my dog every day after work. At first, I could only make it around the block, but as I kept up the routine, I was able to steadily increase the distance. Now we are up to two miles per day.

And by ‘we’ I mean my wife and me. I couldn’t have done it without her. She joined me on every step of the journey, cheering me on as I implemented each new change and keeping me motivated when it got tough to stick to my decisions. When I decided to start going to the gym each morning at 6 a.m., she woke up with me and joined my workouts. When I wanted to learn more about keto and intermittent fasting, she learned with me. Each time I chose to switch out high calorie foods for healthier options, she helped me keep the kitchen stocked with nutritious choices.

Together, our incremental adjustments became more than a diet—they became a complete lifestyle change. It’s tough to believe that it all started with switching out a single soda per day.

Everything changed for me. I’m down 16 pant sizes and together my wife and I lost a total of 150 pounds. My weight dropped so much that I had to give away my clothes and buy new ones not once, but twice. And beyond the exterior changes, I started to feel different. Now, I am more confident and engaged in my life, and I have more energy to spend time with the people I love.

Moderation is key. The Compound Effect is rooted in small, smart choices—not radical shifts. So, I loosen my dietary restrictions on weekends and enjoy a few things I’m craving. I cut out alcohol Monday to Thursday, but Friday to Sunday I enjoy a few beverages. We still eat plenty of food, but we make sure it’s all nutritious. By keeping my goals manageable and reasonable, I ensure that I can stick to them.

The Compound Effect doesn’t just work for weight loss. Now, I teach my kids about how they can apply the same principles to the goals they have. It’s also a theory that’s important for us at work in pharma, where our actions—big or small—can have tremendous impact on patients. If we are willing to make minor changes to the way we work and the effort we put into self-development, little by little, those decisions will change lives.

We must not be discouraged with the many small efforts we put forth. Because if there is anything I’ve learned, it’s that the little things add up. And in our work, they add up to changing lives!

PrevPreviousWe can’t escape this crisis—but we can be stronger on the other side
NextWhat Wine-Tasting Can Teach Us About Engaging PresentationsNext
Yes, I want to learn more to help my team
Scroll to Top